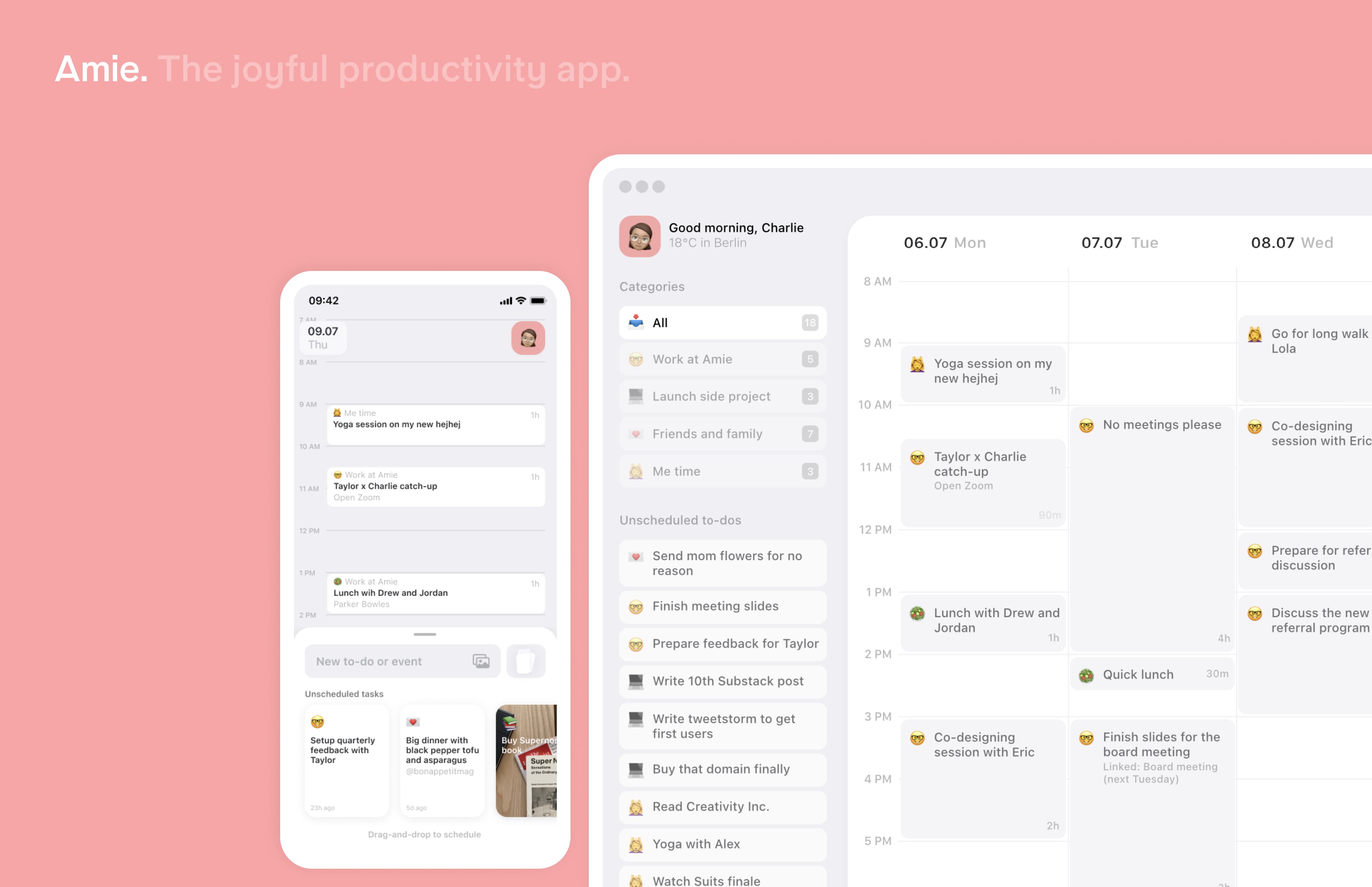 From a Whatsapp group prototype to $1.3 million pre-seed round - this is how a founder validated his concept with off the shelf tools and ultimately lead to him creating Amie - A unique habit-forming productivity platform.

In 2019 Dennis Müller, a Product Manager at N26, a FinTech startup based in Germany had been personally experimenting with various behavioural change techniques. This fascination later lead him to research more about the various methods and frameworks that can help you achieve your goals.

Setting goals is extremely easy. The execution is the hard part.

Through his learning he came up with an idea to develop a platform to help people change their habits.

After discussing his idea with a colleague he decided he needed to find a quick and easy way to test this new idea before considering investing any considerable amount of time and money into the concept.

Dennis decided the best approach would be to create a Whatsapp group and add friends and colleagues that were interested in forming new positive habits.

Dennis managed to get 30 people into his Whatsapp group and began trying and testing various techniques in order to help his new group of testers form positive habits. This initially started with Dennis becoming somewhat of an accountability coach for each of his testers.

For example, one of his testers wanted to start waking up before 6.30am each morning. The tester then sent an image of his toothbrush each morning within the Whatsapp group - each image was timestamped which ensured he actually took the image each day and posted it to the group.

To further improve this early test and begin productising this framework Dennis believed that a calendar was the best interface to work on goals. “Because you have to put in daily action (habits).”

The calendar prototype consisted of a spreadsheet. “It’s quite easy to pull in calendar events via App Script. I wanted to get a quick feel of what the product could be like.”

"Simply putting habits into your calendar already made me much more likely to do them. (I haven’t missed a single Sunday of calling my mom because of that!)"

After testing the early calendar/ todo spreadsheet prototype Dennis continued to shape and add additional functionality through the testing phase with his alpha users.

“This then became a combination of todos, habits, goals and the calendar. Over more time and speaking to users, it was becoming apparent that the app is too complex.”

Falling into the classic trap of over complicating things, as what tends to happen in the product development process, Dennis decided he needed to pair down the user experience. “I started to get rid of all the extras and ended up at the calendar+todo aspect.”

This super scrappy experimental approach Dennis took to test his initial assumptions guided him to the product he has now refined and started development on - called Amie.

As Dennis mentioned in his tweet - the experiment took no time at all to create and has helped shape and refine the product he intends to launch later next year.

This approach is yet another fantastic example of a super light-weight concierge minimal viable product (MVP) - which allowed him to quickly test and validate his concept with a group of testers before considering investing further time and money into the concept.

Dennis and his team have recently closed a pre-seed round of $1.3 million to “kickstart” development and hiring. They plan to officially launch in early 2021.

If you want to find out more about Amie and register to join their waiting list check out their website - I’ve personally spend waaay too much time playing with their landing page and command lines.

P.S check out Amie's neat marketing strategies below. To build hype over the beta launch and to get access to the TestFlight build they have a super impressive referral programme in place and access to a variety of free promotional assets across multiple mediums to encourage spreading brand awareness.

No spam! It's a simple, once a month newsletter packed with super interesting content I have been digesting this month. Join 1878 others each month.